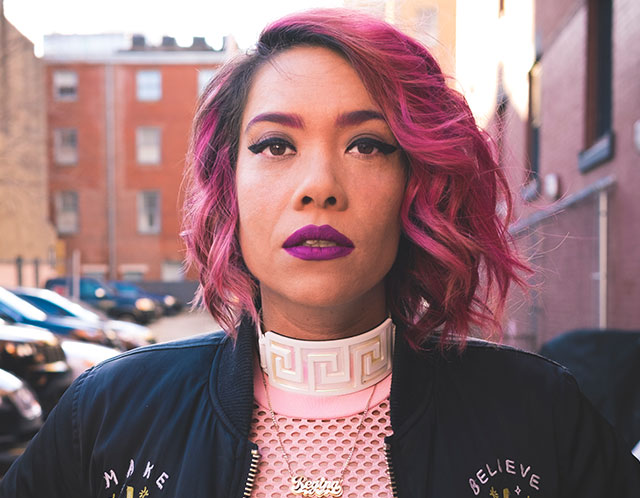 Regina “Gun$ Garcia” Dyhouse is a Philadelphia based DJ. As an art school grad turned music aficionado, she ended up taking the city’s music scene by storm. She initially made her way into the electronic music arena designing merchandise and promoting events for future music DJ/production titans, Seclusiasis. In 2009, she created the party Double Dutch, which became the blueprint for “girl power” in Philly, and showcased the debut performances of Azaelia Banks, Maluca, and Zuzuka Poderosa, among others.

Her sets are carefully curated towards the audience, and she’s often found dancing as hard as the crowd in the DJ booth. She’s rocked crowds from nightclubs to festivals including the Mad Decent Block Party, the Mad Decent Boat Party, Governor’s Ball, and FireFly Festival, and is most recently known for being part of So Far Gone: Drake Night, Salvaje, her montly reggaeton party at the Dolphin and her weekly Man Crush Monday party at The Saint. She has performed with Diplo, Skrillex, Die Antwoord, M.I.A., Dillon Francis, Teyana Taylor, Uniiqu3, and many more. In 2013 she performed as tour DJ for up rap superstar Lil’ Debbie.

Gun$ is also a noted mentor, having taught a slew of aspiring DJs the craft, and counts selectors Suga Shay, Yolo Ono and Magglezzz among her top studets. In 2015 she began teaching at Jam Master Jay’s Scratch DJ Academy.

No stranger to mixtapes, she’s released a number of highly praised compilations showcasing the best in dance and rap music. In 2011 she released the ground breaking all female rap mixtape, “Bad Bitches Bomb First,” which ranked number 34 on SPIN Magazine’s Top Rap Albums of 2011 list – the only female offering on the chart.